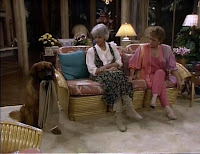 Synopsis: Rose's younger sister Holly visits and drives her up the wall; Sophia gets into some trouble while dog-sitting Dreyfuss.


Rose says she hates her sister Holly but in the season one episode “Transplant,” Rose claims she doesn't know how anyone could hate their own sister.


Blanche: “You have no recollection of Dreyfuss since last Thursday??”


Sophia: “I have no recollection, period, since last Thursday. Anything could have happened in three days. I just hope I'm not carrying Steve Garvey's baby.”


Sophia dog sits for Dreyfuss, thinks he runs away, buys another dog, Dreyfuss comes back, and ends up stuck with two Dreyfusses whom she can't tell apart. 80s sitcom hilarity ensues!


Blanche: “Why is there a big hairy beast in my house?”


Sophia: “My guess is because he bought you dinner.”


Sophia: “Please! Socrates sat under an olive tree in a sheet for years thinking about this kind of stuff. I'm a poor immigrant with a third-grade education. Give me two minutes! OK. I've got it. My Uncle Carlo always used to say, 'Honesty is the best policy.' Of course, Uncle Carlo died a penniless drunk.”


Sophia: “The point is, if you're honest every second of every day, it doesn't always turn out for the best. That was the case with my Uncle Carlo. He honestly remembered the license number of the trigger man in the Sanducci vendetta.”


Rose: “So what you're saying is that because nobody's gonna believe me anyway, I'm better off if I let people find out what's going on for themselves.”


Sophia: “I wouldn't chisel that into a stone tablet, but it sounds serviceable at this hour.”


“Oh, honey, we know you do. You gotta stop buying your hair colorin' out of the 99-cent-or-less bin at the Pic 'n Save.”


Rose: “This problem has to do with Holly.”


Blanche: “Her hair's not the color of a Twinkie.”


Blanche: “Oh, these things happen between sisters all the time. I remember once my sister Virginia wouldn't talk to me for a month, all because I smiled at her boyfriend.”


Dorothy: “There. Listen to Blanche.”


Blanche: “Of course, I was skinny-dipping on his property at the time.”


Blanche: “All right, it was his bathtub. We were blowing suds off of each other when she walked in.”


Dorothy: “Blanche, what is the point of this story?”


Blanche: “Point? Well there's no point. I just like telling it.”


Blanche: “Where did those pants come from?”


Dorothy: “According to the label, The Gap.”


Sophia: “She's mopey, dopey, and full of crap: Rose's sister. Don't mess with me, kid. I have the home-court advantage.”
Sophia: “Please, promise me, on your mother's grave, you won't breathe a word of this to Dorothy. You promise?”
Blanche: “Yes sure, Sophia.”
Sophia: “Good. Now I can save what I know about you and the twin rabbinical students for another time.”


Rose: “Well, it all depends. Will you believe what I say from now on, even if it isn't what you want to hear?


Rose: “Will you believe me when I tell you that somebody isn't as nice as they seem?”


Dorothy: “Of course we will.”


Rose: “Will you believe me when I tell you about how our pig Lester always predicted the Best Supporting Actor Oscar winner every year since 19-”


Blanche: “Rose Nylund, if I didn't know better, I might think you were tryin' to steal my boyfriend.”


Blanche: “You don't have to build him up to me, honey. I like him fine already.”


Rose: “My sister. I left you a note on your bathroom mirror.”


Dorothy: “Why did you leave a note on my bathroom mirror?”


Rose: “Because it was the only one that had enough steam.”


Dorothy: “Another slice of cheesecake, Blanche?”


Dorothy: “Honey, what harm can it do? Lately you've been eating like a bird.”


Sophia: “You think I can't do it? You think I'm irresponsible?”


Dorothy: “You already said that.”


Sophia: “That's emphasis. You never heard the "I have a dream" speech?”


Holly: “Wait, wait! Let me! She's attractive, witty, and great fun to be with, this must be Dorothy. And she's smart, sexy, and stylish to a fault. This must be Blanche. Did I get it right?”


Holly: “Thank goodness. I worried all the way over here I'd get it backwards.”


Dorothy: “I could of lived with smart and sexy.”


Blanche: “You do live with smart and sexy.”


Blanche: “Why? So you can make up some cockamamie story about how you were two ships that passed in the night and it'll never happen again? Save your breath, I've heard all that before.”


Blanche: “Yes, only usually I'm one of the ships.”


The girls should call some paranormal investigators because their living room coffee table vanishes without a trace in this episode. Obviously it's because Dreyfuss is visiting but it's still bizarre when random pieces of furniture appear (piano) or disappear (the TV) based on whether the script calls for it. But I digress. Why oh why are Rose's family members such assholes? Her sister Holly is a slut. Her blind sister Lily is helpless and almost burned down their kitchen. Her daughter Kirsten acted like a stuck-up bitch when she found out her father Charlie wasn't rich. And her other daughter Bridget also slept around (she obviously learned a thing or two from her aunt). I wonder if the writers thought it would be fun to play off the naivete and eternal niceness that is Rose Nylund. That also must be why they almost gave her AIDS and took away her late husband's pension. So yes, Holly is a jerk to Rose even though Dorothy and Blanche are apparently, like Lily, blind to it. She probably eats at the Mortimer Club. One other thing, at one point Holly is supposed to have given directions to Rose about where to meet for lunch. Why the hell is Holly, who is the one from out of town, giving directions to Rose, who lives in Miami? Anyways, Dreyfuss adds some lighthearted shenanigans to the proceedings as NBC was in full-on “Golden Girls Extended Universe Mode” by then (the show had three spin-offs: Empty Nest, Nurses, and eventually The Golden Palace). But my biggest gripe here remains this: I realize pet stores today aren't really the same as they were in the 80s but could you really just go to a pet shop and take home any breed of dog you want? GRADE: B+
Posted by Chris at 3:00 PM