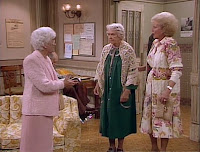 Synopsis: Sophia breaks her friend Lillian out of a retirement home worse than Shady Pines; Blanche decides to get breast implants.


Blanche: “Oh, it's just wonderful to think about, isn't it, the two of 'em together? They're so cute.”


Dorothy: “Thinking about your breasts again, aren't you, Blanche?”


Sophia: “Oh, you remember Shady Pines? That retirement home you stuck me in that resembled Sing Sing. My mistake, Sing Sing has a movie night.”


Sophia: “I know. It's impossible to put a fitted sheet around a big, hairy guy named Ed.”


John Porter: “OK, Mrs. P’Hawkins, um, maybe you can tell me a little about your mother's history?”


Sophia: “Picture it. Sicily, 1900. An olive-skinned woman sets sail for the new world.”


John Porter: “I was talking about her medical history.”


Sophia: “So was I. You think that was a pleasure cruise? There was smallpox, scurvy, typhoid. And that was business class.”


John Porter: “What I need to know is, does your mother require any special medical care?”


Sophia: “She does. Uh, an old war injury. Remember the Maine? She didn't. She was a frogman and swam right into the bulkhead. They put a metal plate in her head, and now she gets HBO through her eyeballs. Don't look at me like that. If Tyson has another fight, you may wanna set her up in the rec hall.”


John Porter: “This is all hard to believe.”


Sophia: “If it's not true, my name isn't Sophia P’Hawkins.”


Dorothy: “I am exhausted. I haven't been this tired since my wedding night.”


Blanche: “Well, a night of unbridled passion should take it out of you.”


Dorothy: “Who said anything about passion? I was tired from picking up beer cans from Stan's poker buddies.”


Blanche: “Lillian, Sophia tells me that you were in the Ziegfeld Follies.”


Blanche: “You must have been something.”


Lillian: “I was quite a looker. Almost as pretty as you.”


Lillian: “Of course, I had bigger breasts.”


Blanche: “Well, there weren't any Sunny Pastures in the South. At least, not when I was growing up. I remember this one old man. His name was Ben. All he did all day long was sit out there on his family's front porch in that old hickory rocking chair and whittle. Just whittle. I used to pass by there on my way home from school, and I'd say, ‘Hi, Ben.’ And he'd yell back, ‘Hi, Blanche. Stay away from my grandsons!’ Anyway, I realized that Ben could spend all his days happy, whittling away, because his family was there for him. I will never forget that look on his face. He was happier than a Kentucky yearling frolicking in blue grass as high as a hoot owl's perch on the top of a spring-“


Dorothy:  “In English, Jethro! In English!”


Blanche: “He was happy. Anyway, Ben got older, and I guess a little bit frail, and, this is the hard part of my story.”


Blanche: “One autumn day, I walked by that porch and old Ben was gone.”


Blanche: “No, he was sent up the river on a morals charge.”


Sophia: “Sunny Pastures is the worst nursing home in the city. It's every old person's nightmare. That, and a childproof cap on the Kaopectate bottle.”


Rose: “Boy, when you hear horrible stories like that, it brings up so many questions.”


Sophia: “It sure does. Why do we let things like this happen? Why can't we care for our elderly the way they do in Japan? Why are there 17 sets of hooters on the coffee table??”


Blanche: “Those are mine, Sophia.”


Rose: “Oh, hi, Blanche. How was your appointment with Dr. Rosensweig?”


Blanche: “Well, I was so nervous that I just rushed right in there and pulled off my top, and said, ‘Well, what do you think?’”


Blanche: “He said, ‘I think you're probably looking for Dr. Rosensweig. But if you ever want a discount on life insurance, call me.’”


Rose: “Blanche, are you sure you're not being a bit silly?”


Rose: “Let me tell you something. When I was a schoolgirl, I developed early, and all the boys noticed and hit on me. Not one boy was ever interested in my mind.”


Sophia: “Believe me, you have to get into it more before you realize how bad it really is. Just like ‘War and Remembrance.’”


Sophia: “Uh no, we're here to see about checking in Mom.”


Sophia: “Uh it's a long, involved, and somewhat sordid story. If you want to get a clearer picture, I suggest you rent the cassette of ‘Chinatown.’”


Dorothy: “If it'll make you feel better, I'll take you.”


Sophia: “Oh, good. Now while we're there, will you promise you'll hold my hand the entire time?”


Dorothy: “Oh, Ma, are you really that scared?”


Sophia: “No. I just wanna make sure you're not grabbing at brochures behind my back.”


Blanche: “Listen, I just picked up these pamphlets at a cosmetic surgeon, and I want you to help me decide which alterations I oughta get.”


Rose: “Blanche, none of these women have any tops on.”


Blanche: “Well, I know, honey. These are the ‘after’ pictures of satisfied customers. I was thinking about having my breasts done like hers.”


Rose: “All right, Blanche, but do you think black really suits you??”


Blanche: “And listen, what the hell if we do have to go to a nursing home, let's all go together.”


Rose:  “But what happens when there's only one of us left?”


Sophia: “Don't worry. I can take care of myself.”


Critique:
It’s sort of funny how big a deal the girls make about the elderly being forgotten about and Sophia making it a point to “adopt” Lillian and watch out for her and yet we never hear from her ever again. But I digress. It was just a couple seasons ago when Blanche felt the need to have plastic surgery (including her breasts) because her old college sorority sisters looked better than her. But we all know she canceled her surgery in the hopes that her plastic surgeon, who asked her out, would eventually pay for it. I guess it didn’t work out, huh Blanche? And exactly how many museums are doing so well financially that they can give their employees large bonus checks? Anyways, this episode is great because it has so many good moments, most of which are related to breasts. The Lillian storyline is pretty depressing when you get down to it, but the writers don’t go overboard with the sappiness like they did in “Brother, Can You Spare That Jacket.” This still feels like a good comedy half hour rather than an afterschool special. Highlights include Blanche’s seventeen sets of hooters on the coffee table (“Notice how they seem to follow you wherever you go?”) and  Sophia “P’hawkins” breaking out Lillian. Of course Lillian must be really forgetful because she also showed up, obviously as a different character, in “The Days and Nights of Sophia Petrillo.” Though most of us recognize actress Ellen Dow— who only just died in 2015 at age 101— from bit parts in movies like “Sister Act” and “The Wedding Singer.”  GRADE: A-
Posted by Chris at 11:24 AM