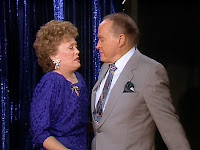 Best of B.E.D.
Blanche: “This whole fantasy about Bob Hope is sick.”
Dorothy: “Sick.”
Blanche: “I mean if she's gonna have fantasies, they ought to be the normal, healthy kind. Like sweaty Argentinean cowboys whipping things while they ride naked on the back of Brahma bulls.
Dorothy: “I have to remember to stop using your towels.”
Blanche: “Oh my God, you're really Mr. Bob Hope. Oh being this close to you is the biggest thrill of my life.”
Bob Hope: “If you were any closer, there wouldn't be room for my car keys.”