Brother, Can You Spare That Jacket? S4E8 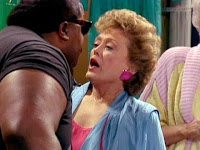 Synopsis: The girls win $10,000 on a scratch off lotto ticket and set off on a mission to find the lost ticket after it mistakenly gets donated with some old clothes.

80s Flashback
Blanche: “Do you know who that is?”
Sophia: “Sure. It’s the guy from the Pepsi commercials.”
Rose: “Pepsi commercial? Michael? Oh, my God! That's Michael J. Fox!”

Crazy Continuity
Doesn’t the homeless man from Minnesota that Rose talks to look awfully like the owner of that dinner from “Twas the Nightmare Before Christmas?” I guess when you make terrible business decisions like leaving your business to be run by total strangers you could end up on the street.

Musical Moments
“Brother Can You Spare a Dime” blares over the soundtrack as the girls search for the lotto ticket to really emphasize how shitty we should feel.

Let’s Get Political
Congressman Philip Starr: “Ladies and gentlemen, I am congressman Philip Starr and I've recently been accused of being insensitive to the homeless. Well, I think tonight's sizeable cash contribution should lay those accusations to rest.”
Dorothy: “He doesn't even care about the jacket.”
Blanche: “Sweet Jesus, it's a miracle. This is going to be easy.”
Rose: “Well, don't take any chances. Sleep with him anyway.”

That’s What She Said
Homeless man: “This is your first time?”
Blanche: “Oh lord, it's been ages since I heard that from a man.”

Shady Pines, Ma
Rose: “Are you sure we're in the right place?”
Dorothy:  “Mission Street Shelter for the Indigent Homeless. This is where they said they sent the jacket.”
Blanche: “Kinda drab, isn't it?”
Dorothy: “Blanche, it's a shelter, not the flagship of the Hilton chain.”
Sophia: “Kinda reminds me of the Shady Pines Retirement Home, except here the lights in the exit sign work.”

Zbornak Zingers
Rose: “Dorothy, that's our jacket. Do something.”
Dorothy: “I'm sorry, Rose. I left my flamethrower in my other purse.”

Product Placement
Rose: “I have a really dumb question.”
Sophia: “And I have a box of Chiclets. What's your point?”

Sassy Sophia
Dorothy: “Ma, why are you reading Rose's mail?”
Sophia: “Because all you got were bills. Listen to this part at the end, tell me if you think Joanne's a lesbian.”

Sweet, Single-Digit-IQ Rose
Blanche: “What’d he say?
Rose: “He said he was in total agreement that it was a miscarriage of justice and we deserve the money.”
Dorothy: “Oh that’s great!”
Rose: “He also told me I'd called his Chinese restaurant instead of the Lottery Commission. He felt so bad he's giving us free egg rolls the next time we come in.”

Dorothy: “No, Rose, that's the way it's supposed to look. It's an aviator jacket.”
Dorothy: “And now I can afford some accessories for it.”
Rose: “Like a purse?”
Blanche: “Like an aviator.”

Critique: This is another one of those ham-fisted “important issue” episodes but I don’t dislike it like many fans do. Sure it gets a bit sappy in its closing scene and hits you over the head with its message but homelessness was a hot button issue at the time. And remains to this day. Having said all that, this episode is utterly preposterous in the most delightfully ridiculous way. The fact that Michael Jackson would stop by the local hospital thrift shop before his concert is only the tip of the iceberg. The girls who are no stranger to money-making schemes seem to be particularly hungry for cash in this one. They’re not above living with a gigantic pig for money, flying across the country for money, dancing all night for money, or pretending to be homeless for money. After all, if we learned anything from the 80s it’s that Greed is Good. GRADE: B-
Posted by Chris at 8:38 AM