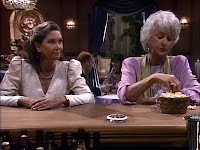 Synopsis: Stan announces he’s getting remarried but Dorothy insists on stopping the wedding when she shares a moment with Stan after Sophia suddenly falls ill.


80s Flashback
Stan: “I gotta go now. I'm on my way to surprise Katherine with this. What do you think?”
Sophia: “I think Lisa Bonet spent more on the ring in her nose.”


Let’s Get Political
Blanche: “If I want advice on getting ditched, I'll ask an expert. Dorothy, did I get ditched?”
Dorothy: “Yes, Blanche, but don't feel bad. Look what it's done for Sonny Bono.”


That’s What She Said
Blanche: “I cannot believe it, I have lost it haven’t I?”
Sophia: “In more backseats than any woman I know.”


Lewd Ladies
Dorothy: “Look, either you're gonna follow his orders or I'll call him and tell on you.”
Sophia: “Oh, what is he gonna do? Come over and spank me?”
Blanche: “If he does, tell him to come by my room.”


Zbornak Zingers
Rose: “Dorothy, should I get Sophia a glass of water?”
Dorothy: “No, Rose. You should sit here and watch her hack herself to death.”
Rose: “Are you sure?”
Dorothy: “GET THE WATER!”


Insult Watch
Dorothy: “Ma, the doctor says you're gonna be just fine.”
Sophia: “Of course I am. I survived war, disease, and two seasons of Designing Women.”


Product Placement
Dorothy: “You look terrible.”
Sophia: “Gee, I guess I won’t be making the Sports Illustrated swimsuit issue this year like the three of you.”


Best of B.E.D.
Rose: “Hurry up, Blanche.”
Blanche: “Rose, stop pulling on my nightie. It's only got one more yank left in it before it falls completely apart and I'm saving that for Henry Barnsworth.”


Sweet, Single-Digit-IQ Rose
Dorothy: “I wasn't alone. Stan came by and stayed with me. Brought me food, held me. Showed me that special part of himself.”
Rose: “Right there in the waiting room?”
Dorothy: “Not that part, Rose.”


The Boob Tube
Dorothy: “Oh, I hate waiting.”
Blanche: “I hate hospitals.”
Rose: “I hate when the people put each other down on Love Connection.”


Golden Quotes
Stan: “There's nothing wrong with my taste. You've seen that ring that I picked out for Dorothy.”
Dorothy: “Actually, he was going for a bracelet, but the mechanical claw grabbed the ring.”


Blanche: “Well, way to go, Rose. You talked her into doing exactly the opposite of what we wanted her to do.”
Rose: “I guess that's why they took me off the suicide hotline at work.”


Critique: Oh boy what I wouldn’t give to see the look on Katherine’s face when she finds out the woman she’s been spilling her guts to is Dorothy. Speaking of Dorothy, she looks like the Joker in her wedding attire doesn’t she? But I digress. This is a very nice episode that deftly balances good humorous moments with well-earned sweet moments without ever being too overly dramatic. You never really believe Sophia is going to die or anything but Dorothy’s concern is palpable. It’s not crazy to believe that she would fall for Stan again. We’re only one season away from her actually thinking of remarrying him. Having said all that, this is one of those simply fine but otherwise somewhat unspectacular episodes. There’s nothing overwhelmingly memorable here but nothing terrible. There are some good lines and Stan and Dorothy have their trademark good chemistry.  But we get no St. Olaf story, no story about Sicily, and no story about the Deep South. And apparently Dorothy’s favorite type of food is Chinese. Who would of thought? GRADE: B
Posted by Chris at 12:56 PM