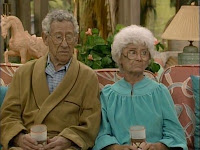 Synopsis: Newlyweds Max and Sophia move in with the girls since they haven’t found a place to live but end up opening a pizza-knish stand at the beach instead; Dorothy takes up smoking.


Sophia says he hasn’t had a cold in 40 years but lest we forget she caught a cold going out in the rain t rent dirty movies in “Isn’t It Romantic?”
Also, you'd think Blanche would know her own address. In "Bringing Up Baby" Sophia mentioned the address as 6151 Richmond St (and Dorothy acknowledges that as correct) but here Blanche says the address is 5161.


Max sings along to “It Had to Be You” with Sophia on the boardwalk.


Vanderhoeven Rocket – a car manufactured by the St. Olaf Motor Coach Company, it had eight tires and was totally powered by cow manure.


Dorothy: “I set off the smoke alarm.”


Dorothy: “I smoked a cigarette, you amoeba!”


Dorothy: “I've just been under a lot of stress lately. My job, Ma getting married.”


Blanche: “You're growing older, you don't go out much, your chin is starting to droop”


Dorothy: “You know, since I've already had the cigarette, why don't you just blindfold me and shoot me?”


Sophia: “Does it say 7-Eleven across my forehead? I got peppermint.”


Max: “I'll try one. I like butterscotch better. What is this? Coconut??”


Dorothy: “I need a cigarette.”


Blanche: “No, Dorothy! You sit right down here. Now, you need to exercise a little self-control. Dorothy, listen. You can quit smoking. Now, just do it the way I did it, just taper off - smoke only after sex.”


Sophia: “Good idea. One pack’ll last her a lifetime!”


Rose: “No. My favorite uncle, Uncle Gunter, used to sprinkle Parmesan cheese on his hair… He said it was the perfect complement to the croutons he'd taped to his eyebrows. He had a Caesar complex. Salad, not Julius.”


Dorothy: “Rose, maybe you ought to work on the knishes. Or did you have an uncle who was a Mr. Potato Head??”


Blanche: “Hello, fire department? This is Blanche Devereaux at 5161 Richm- Oh! Well, of course you know where it is, hi Ed! I'm on fire. Why you naughty boy!”


Max: “How could the stand have burn to the ground?”


Dorothy: “I have a confession to make. The reason I sent you two ahead and said I'd lock up is because I wanted a cigarette. And I guess I didn't put it out.”


Rose: “Well, I wouldn't worry. How much harm can it do? The place already burned down.”


Rose: “Dorothy, I know what you're going through. I smoked for years.”


Dorothy: “You smoked? Rose, that's like finding out Lassie was an alcoholic.”


Rose: “Lassie was an alcoholic?! That explains why she always tipped to one side when she waved goodbye to Timmy.”


Sophia: “You should have that printed on a T-shirt.”


Rose: “Never fear, Doctor Rose is here. I made you both an old-fashioned St. Olaf tonic. Guaranteed to get you back on your feet and put hair on your chest. That's the one nasty side effect they could never figure out.”


Dorothy: “It is always the same thing with you, Blanche. Sex, sex, sex. I am tired of hearing it.”


Rose: “Maybe that's because you're not getting any, Dorothy.”


Dorothy: “Do you want the pot again, Rose?”


Critique: In past episodes Sophia seemed to be an expert in curing a cold or the flu: She made Dorothy hot toddies and made a special concoction for the vaporizer in “The Flu” episode. But here she can’t seem to cure her and Max before the big beach festival, but I digress. The closing part of this double episode is great though for some reason there’s no mention of Rose and Blanche’s Elvis fan club. And the fact that Max just picked up and moved from New York to Miami at the age of 84 with no living prospects it just bizarre. This is probably the weaker of this 2-part episode. I never believed someone so level-headed like Dorothy would ever smoke and the dialogue here isn’t quite as consistently funny as the first part. However controversial Max is as a character, some people actually hate him for some reason, I enjoy this super-sized episode.  As a final note, I could watch Dorothy smacking Rose’s head in a sauce pot with a wooden spoon all day long. GRADE: A-
Posted by Chris at 1:08 PM