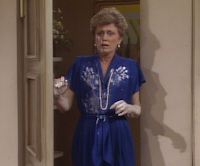 Synopsis: Rose deals with post traumatic stress after the girls' house is robbed.

80s Flashback
Rose: “The name Madonna doesn't really fit her.”
Sophia: “Slut would be better.”
Dorothy: “She did things on that stage I never did with my husband!”

Crazy Continuity
Where to begin? Blanche's precious Chinese vase, which Rose shots to pieces magically reappears intact in the next episode. Rose tells a story about a jeweler from “Little Falls.” We all know they hadn't come up with St. Olaf at this point.

Let’s Get Political
Blanche: “Shh! Be quite, they could still be here!”
Rose: “Who??”
Dorothy: “The Supreme Court.”

Animal Alert
Sophia: “Some attack dog, he hid under the table, peed on the floor, and ran out the back!”

Zbornak Zingers
Blanche, covered in flour: “They got my jewels.”
Dorothy: “But I see they didn't get your cocaine.”

Product Placement
Rose: “They were probably looking for drugs.”
Dorothy: “We have Maalox and estrogen. Now, how many junkies have gas and hot flashes?”

Sassy Sophia
Rose: “I was never once robbed or murdered when I was with Charles.”
Dorothy: “You could have just as easily have been murdered living with Charles.”
Sophia: “I'm surprised she wasn't murdered by Charles.”

Best of B.E.D.
“Justice will be done here. I hate criminals. I just hate 'em. Someone's gonna pay for this heinous crime! We're gonna have a good old-fashioned hangin'. That's right, a hangin'. Only first we'll have a whippin', and then we'll have a hangin'. Nobody takes my mama's jewels without swingin' for it! Nighty-night.”
Blanche: “With George, when I'd hear a noise, I'd wake him up, and then he'd take out his gun.
Then he'd have to find the bullets, because I'd always hide the bullets.
And then, when he found the bullets, we'd make love.”
Sophia: “Boy, can you tell a story.”

Reel References
Dorothy: “This is a .375 Magnum one of the most powerful handguns in the world. It could blow your head off. The only problem is, I don't remember if I shot four rounds or five. So you have to ask yourself, do you feel lucky? Well, do ya punk?!”
Sophia: “Go ahead, make her day.”

Golden Quotes
Blanche: “You shot my vase!”
Rose: “I didn't shoot Lester!”
Blanche: “I'd rather you shot Lester!”

Sophia: “I manage to live 80, 81 years. I survive pneumonia, two operations, a stroke. One night, I'll belch and Stable Mable here will blow my head off!”

Critique: Besides some odd, questionable technical issues that plague this episode in the “on location” parking garage sequence, (and the most fake dog barking sound effect in television history) this is a pretty great half hour. It's apparent that this one was shot earlier in the season. Sophia looks different than she did in the previous episode and Rose even refers to her late husband as Charles instead of Charlie. Beyond that the episode does tend to be a bit overly dramatic since Rose is going through such a tough time. There are however, plenty of great lines and the infamous, and ridiculous, moment in which Rose shoots Blanche's beloved vase instead of shooting Lester. Blanche's recounting about how she mistakenly maced herself in the police station is a highlight. You can definitely tell this is a Susan Harris script as it deals a lot with situations older women have dealt with, including what it's like to live, God forbid, “without a man.” It's a dramatically awkward but sometimes pretty funny, if a bit rough around the edges, episode. GRADE: B
Posted by Chris at 6:38 AM