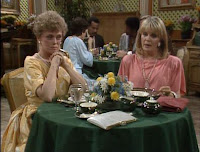 Synopsis: Blanche's estranged sister Virginia comes for a visit and freaks Blanche out when she asks her to donate a kidney; meanwhile, the girls sit for a young couple's baby.

Let’s Get Political
Blanche says she wishes she had Nancy Reagan's decorator.

Lewd Ladies
Rose, referring to Blanche: “Wherever she goes she finds a man.”
Sophia: “So do hookers!”

Zbornak Zingers
Blanche, referring to the baby Dorothy is holding: “Dorothy, what in the world is that?!”
Dorothy: “It's a flounder, Blanche.”

Insult Watch
Blanche, to Virginia: “So, you thinking about getting a face lift? For your, how do I put this delicately, turkey waddle or what?”

Tales from the Old South
Blanche tells a story from her childhood when Virginia electrocuted her by tricking her to place a broken Christmas star on her finger. She apparently did a “crazy, rubber dance.”

Product Placement
Dorothy: “Ma, could you eat a little more quietly please?”
Sophia: “These are Fritos, do you want me to swallow them whole??”
Sophia: “I'm catholic, I can't spread a Wise Man on a Ritz cracker.”

Sassy Sophia
Sophia says she nursed her son Phil until he was twelve years old, and he wanted to come home during lunchtime. She says “I've got nothin' left up here.”

Best of B.E.D.
“Hey I know a bar over in Coco Beach where you can pick up over-the-hill astronauts...”

Golden Quotes
Rose: “Why would she need a kidney?”
Dorothy: “TO FEED THE CAT ROSE!”

Critique: This is another solid early episode where we get to learn a little bit more about Blanche's family. We now know she has two sisters, Virginia and Charmaine. She seems to have a tempestuous relationship with both of them which makes sense because Blanche is always refers to how sisters in general are always jealous of each other. This is a great showcase for an episode with really serious subject matter with really funny lines of dialogue. The show balanced humor and drama pretty deftly and this is a prime example. The subplot of the girls having to watch a baby is a B plot that would be repeated in this series ad nauseam, but it's always funny watching Rose finding “someone she can talk to.” Sheree North who played Virginia would reprise the role later in the series when their father Big Daddy passes away. GRADE: B
Posted by Chris at 11:19 AM