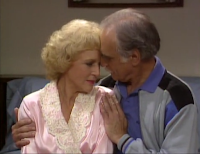 Snyopsis: Rose's boyfriend Arnie invites her on an overnight cruise which causes her to become anxious since she hasn't been intimate since her husband Charlie died; meanwhile, Dorothy and Sophia play Gin Rummy.

80s Flashback
Blanche: “Honey, are you alright?”
Rose: “I'll be fine.”
Blanche: “Is this about Arnie?”
Dorothy: “No Blanche, she's upset because they keep changing the taste of Coke.”

That’s What She Said
Dorothy: “Oh back off Blanche, not all of us are classified by the Navy as a friendly port!”

Lewd Ladies
Sophia: “So did you and Arnie play Find the Cannoli?”

Zbornak Zingers
Blanche: “Most of the boys I dated in college were just for the stories.”
Dorothy: “You must have more stories than O'Henry.”

Reel References
While we don't get the full details Sophia mentions that Dorothy's Aunt Jean once slept with Charles Boyer.

Product Placement
Arnie: “I talked to the purser, another cabin is available and I'll move to it, but I need to go in the bathroom Rose, I hate to go anywhere without my Actifed.”

Sassy Sophia
Blanche: “I'm gonna have to meet men lying down.”
Sophia: “I thought you did!”

Back in St. Olaf
While we don't get an official St. Olaf story, this is the first time Rose mentions that her husband Charlie died while they were making love.

Best of B.E.D.
Blanche, discussing the first man she slept with after George died: “As the reverend was performing the funeral service, I knew for sure that he wanted me. I had always known there had been something between us. Sometimes from the pulpit he'd be talking about sin, he'd look straight at me.”

Golden Quotes
[Rose is droning on and on about her cruise activities]
Dorothy: “WHO CARES ROSE, DID YOU AND ARNIE HIT THE SHEETS OR NOT!?”


Critique: This is a decent early episode but hardly one of my favorites, though one scene saves the entire thing: the classic moment where the girls discuss the first men they slept with after they were no longer married. Since this is an early episode certain things that become commonplace in the series had yet to be established. Rose doesn't mention St. Olaf by name, Sophia still doesn't say her trademark “Picture it”, and even Blanche's accent doesn't seem quite at its Southern peak (though she seems more oversexed than in the past two episodes). This is the first time Rose is getting her own story line and it makes sense for her character to be prudish, but unfortunately for us it's not all that interesting. Arnie is not nearly as fun a character as Miles is later in the series. Though the girls' discussions about sex fuel the show and certainly helped it to quickly become a number one rated series. GRADE: B-
Posted by Chris at 1:29 PM