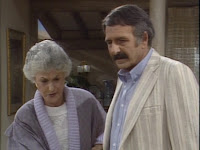 Synopsis: Dorothy's ex-husband Stan returns to have Dorothy sign some papers and their romance is rekindled; meanwhile, the Rose and Blanche plan a vacation (without Sophia).

80s Flashback
Dorothy: “Is that is, Rose? I mean, are you finished, or is there something else that you don't understand?”
Rose: “Well, actually, there is. I don't understand how a thermos keeps things both hot and cold.
Dorothy: “Neither do I. But I'll tell you, if ever I sleep with Mr. Wizard, I'll find out what I can.”

Let’s Get Political
Stan: “I can't believe how expensive roses got since the last time I sent them to you.”
Dorothy: “Yeah, well, everything's gotten more expensive since Truman left office.”

That’s What She Said
Stan: “Dorothy, hello. You look fantastic.”
Dorothy: “Please, please, Stan. No hugging, no kissing. Let's just do it and get it over with.”

Shady Pines, Ma
Stan: “Just sign on the last page.”
Sophia: “Read it first. The last time he had you sign something, I ended up in a home.”

Lewd Ladies
Rose: “I don't know any French.”
Blanche: “Don't worry. All you need to know are two phrases: yes, and no, your roommate can't watch.”

Product Placement
Stan: “Chrissy left me for a younger man.”
Dorothy: “Younger than Chrissy? Where did she meet him, Camp Snoopy?”

Back in St. Olaf
Rose tells a story about how she befriended an “Aqua Midget” named Eddie Parker while her husband Charlie was off fighting in the war. He had a diving act where he jumped off of a step ladder into a punch bowl. He had feelings for her but Rose didn't feel the same and ended it because she could never be with anyone in show business.

Best of B.E.D.
Blanche: “I want to go to an island… some place where swarthy men who don't speak English rub oil all over your body.”
Dorothy: “Great, then we can go for a ride on the subway.”

Golden Quotes
Chrissy: “I want you back, Stick Man!”
Dorothy: “Here's to terrific sex. And the dumb blonde who's not gonna get any.”


Critique: These early episode titles are pretty dull, huh? But I digress. This is probably one of my least favorite early episodes. I always found that the early episodes with Stan were kind of boring, though he became funnier as the series went on. Oh, and poor Sophia. Not only did she always seem to get the shaft in terms of storylines, sometimes she wasn't even included in either plot-line. At least she was just coming off the Sophia centered “Heart Attack” episode. We do finally get a reference to her being put in the “home” but still no other specifics about her time at Shady Pines. Stan returns so that he can sell off some swampland that he and Dorothy bought on their honeymoon in Miami. Seems appropriate. They sleep together and then Stan becomes too attached. It's a merely fine episode with some decent lines of dialogue (and Rose does finally tell a full on St. Olaf-like story without ever actually mentioning St. Olaf) but otherwise it just feels unmemorable (save for the Stick Man line obviously). GRADE: B-
Posted by Chris at 4:48 PM