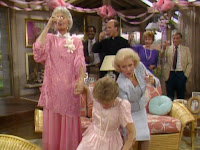 Synopsis: When Dorothy’s daughter Kate announces she’s getting married Dorothy gets apprehensive about inviting her ex-husband Stan to the festivities.


Stan: “Blanche, would you care for something? It doesn’t look like you’re fighting the Battle of the Bulge.”


Dorothy: “Yes, as long as he stays young and firm.”


Priest: “Oh yes thank you very much… Now I know what I’m giving up for Lent.”


Rose asks Dennis, who is a podiatrist, if he’s ever met Dr. Scholl.


Priest: “Sophia, there you are I’ve been looking for you.”


Rose: “I don’t know what I would’ve done if Charlie had suddenly paid a visit.”


So, does anyone else notice that Kate dials Stan, who allegedly lives in Maui, and no one seems to mind that she’s making a call halfway across the world? But I digress. (And we all know that Dorothy can’t even get through to New Jersey with MCI) This is a solid early episode and, in fact, l enjoy it more than the pilot. You get a better sense of how the characters will eventually find their grove. Though things aren’t quite there yet. The scene in the bedroom with Sophia and Dorothy involves wise advice without a “picture it” story. This is also the first time you see Dorothy’s ex-husband Stan who becomes a staple supporting player throughout the series and a punching bag for most of the ladies as well. The numerous references to Stan’s bald head start right here. The episode really belongs to Bea Arthur as she forces Dorothy to confront the man who ruined her life. And when Dorothy squeezes Blanche’s hand, dropping her to her knees, it’s pretty priceless. Also, Dennis and Kate’s reception must go down in the annals of wedding history as the corniest and lamest wedding reception ever. Why the girls constantly felt the need to throw weddings and receptions in their own house is beyond me. GRADE: B
Posted by Chris at 12:07 PM