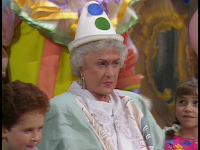 Synopsis: While preparing to throw a birthday party for a friend, the girls reminisce about past birthday moments.

Crazy Continuity
Does anyone else think that Lou the Plumber moonlights as Mr. Haha?

Musical Moments
Upon learning that Roberta's birthday party is actually a surprise party for Blanche, the girls and their male guests form a conga line.

That’s What She Said
Blanche: “Who wouldn't have fun eatin' a foot-long Mr. Ha Ha dog?”

Shady Pines, Ma
Dorothy: “Rose had planned a surprise birthday party for me, you were still living at Shady Pines.”
Sophia: “You mean 'the home.' Say it Dorothy, 'the home.'”

Lewd Ladies
Blanche: “Roger! Edgar! Burt! Leonard! Well, what are they all doin' here?”
Rose: “I invited everybody in your address book.”
Blanche: “The little red one by my night stand?”
Rose: “No, the little black one next to your hot body oil dispenser.”
Blanche: “Wait a minute, fellas. Now, no need to rush off like this. It is my birthday. Who wants to be the first one to spank me??”

Product Placement
Blanche, about Sophia's cake: “I think you put too much rum in it.”
Sophia: “So stick an umbrella in it, and serve it with straws. Everyone will think they're at Trader Vic's.”

Back in St. Olaf
Rose: “It kinda reminded me of a party back in St. Olaf, when I was a little girl. Big Sven and Little Sven were celebrating the first anniversary of their smoked herring hoagie house, when Big Sven-”
*timer goes off*
Blanche, Dorothy, & Sophia: “I'll get it!!”
Dorothy Zbornak is My Spirit Animal
Mr. Haha: “Get up on stage, Dorothy!”
Dorothy: “Get BENT, Ha Ha!”

Best of B.E.D.
Rose: “Well I don't see how anybody can hate birthdays.”
Blanche: “Well because they are constant reminders that with each passing year our bodies begin to sag, our faces begin to wrinkle, our hair begins to turn gray. Of course, none of that's happened to me yet.”

The Boob Tube
Dorothy: “I told Roberta to be here at 2 o'clock.”
Rose: “Do you think she suspects anything?”
Sophia: Please, the woman is 88, she still tries to find 'Gunsmoke' on Sunday nights.”


Critique: Two words: Ha. Ha. You know, I always wondered how Rose and Blanche got Dorothy to even walk into Mr. Ha Ha's Hot Dog Hacienda? Surely she had to know what she was getting into. Maybe they blindfolded her? But I digress. So the Mr. Ha Ha scene is probably a Top Five Golden Girls scene of all time right? I mean it's right up there with the condoms scene and the electric blanket bedroom scene. It's a classic scene and I could literally watch Dorothy reach over to strangle Rose over and over and over again. The second vignette takes a more serious turn and shows Rose in St. Olaf celebrating her first birthday after having lost Charlie. It's sort of a bummer, but Betty White really does nail it. It's also the only scene in the series that takes place in St. Olaf (Eagle eyed viewers will notice that Uff Da! mug on Rose's counter). The third vignette takes place in Brooklyn in 1956. A younger Sophia learns that she's actually two years older than she thought because of a mistake on her birth certificate when she immigrated to the US. This is the first time we see Estelle Getty in what appears to be her real life age and actress Lyn Greene playing young Dorothy in a dynamite piece of casting. The scene isn't all that particularly funny but it's a delight to watch (and Green will thankfully return three more times). The last vignette revolves around the girls trying to throw Blanche a surprise party, only to find out she hates surprise birthday parties. This episode really belongs to Mr. Ha Ha, the other clips are fine but not nearly as funny. Overall, "A Piece of Cake" - the show's 50th episode - is sort of a mixed bag, but still a keeper. GRADE: B+
Posted by Chris at 2:48 PM