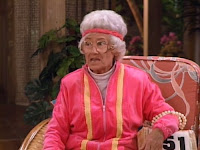 Synopsis: Sophia participates in a somewhat questionable “walkathon,” while Rose, Blanche, and Dorothy babysit for the participants' kids; they eventually realize that an infant left in their care has been abandoned.

80s Flashback
Dorothy: “Who could that be at this hour?”
Sophia: “Who do you think, the paparazzi. Now I know why Sean Penn gets so ticked off!”

That’s What She Said
Dorothy: “Creamed what was left on his pants??”

Take Me Out to the Ballgame, Stanley
Emily's father: “I did call. Last night. I spoke to a woman who said she'd just won the Ironman Triathlon.”
Sophia: “I don't remember this guy calling.”

Lewd Ladies
Blanche: “I like to sit.”
Sophia: “We know, it's your second favorite position.”

Zbornak Zingers
Dorothy, after getting off the phone with the police: “He said since Emily's parents left her in our care, we do have two options. We can either wait for the Children's Protective Services to contact us, which should take about 48 hours, or we can take her in.”
Rose: “Take her in... where?”
Dorothy: “Around the inseam, Rose.”

Insult Watch
Rose: “Norman, would you like to play with a Potato Head?”
Norman: “Sure, what do you feel like doing?”

Product Placement
Sophia: “Easily a personal best. It was electric. The starter fired his pistol into the air and like a shot I left half my competition in the dust.”
Rose: “You were that fast?”
Sophia: “No, it was the over 80 category, most of them dropped from fright... So, finally, the race was underway. I start off slow. I'm cagey, like a panther, but when the time is right, I pounce. The crowd is on its feet. 'Sophia. Sophia.' My heart is pounding in my ears. But then again, it always pounds in my ears. I could see the finish line. It was only two or three hundred yards away. And then it happened. What every runner dreads: I hit the wall.”
Dorothy: “Ma, you ran out of steam?”
Sophia: “No, I actually hit a wall. They put up a new Wendy's on Collins Avenue. From what they told me, I picked myself up, staggered over the finish line, and collapsed. People are talkin' the covers of national magazines.”

Sassy Sophia
Sophia: “I signed up for the charity walkathon.”
Dorothy: “Oh Ma, are you nuts? I mean this is for people who walk a lot!”
Sophia: “So what do I do, hover? I've been walking since 1904.”
Sophia: “Rose, did I say a mother needs a child? I meant roommate. Give me $20.”
Rose: “What for? Seoul, Korea, 1988. The Olympics. I'd like to be there competing for the USA. Contribute now, and I'll make sure you a Sophia lapel pin.”
Rose: “OK! Good luck. We'll be watching.”
Sophia: “Thanks. And Dorothy, if Gladys calls, tell her I'll be able to make bingo tonight.”

Back in St. Olaf
Rose: “I love charities. In fact, I helped establish the Henry Fjord Foundation... Henry Fjord was a saint. He dedicated his whole life to eliminating pond scum from Lake St Olaf. His son, however, was a big disappointment. Henry Fjord Jr. He didn't want to follow in his father's footsteps. He thought scum was beneath him.”

Rose: “I was almost abandoned. I was nine. It was the last night of the Deep-Root Vegetable Carnival, and I was having the greatest time. Eating candied turnips, and guessing how many sweet potatoes were in the glass jar. Bobbing for yams. I had a knack of always coming up with the firmest, most appealing yams.”
Blanche: “I was once told I had the firmest, most appealing gams.”
Dorothy: “Blanche, try and stay with us.”
Rose: “Anyway, the last time I surfaced, clutching a humdinger of a yam between my teeth, my parents were gone. Well frantically, I searched the carnival grounds. I was convinced I'd spend the rest of my days with the bearded lady as my foster mother, and the man who hoses down the elephants as my dad. Anyway, I was lost. And scared. But then I did what generations before me had done. I gazed up into that dark night sky and found the bright star that could guide me home.”
Dorothy: “The North Star.”
Rose: “Actually, it was the Texaco star. From a service station across the street. Our farm was just down the road from it.”
Dorothy: “Rose, honey, have you been washing the fruit off before you eat it?”

Best of B.E.D.
Blanche: “Now here's something here. How 'bout sponging.”
Dorothy: “What? What's that?”


Blanche: “It says here, spongers help cool off the walkers by spongin' and rubbin' down their hot bodies as they pump their way through greater Miami.”

Reel References
Rose: “Norman, I'd like you to meet my friends, this is Dorothy.”
Dorothy: “Hello Norman.”
Norman: “It's the Bride of Frankenstein!”

Golden Quotes
Blanche: “Why does she keep crying like that?”
Rose: “Oh she probably just misses her mother and needs to hear a feminine voice.”
Dorothy: “And what was I doing, my Ben Gazzara impersonation?”

Blanche: “I didn't hate changing diapers, but I was never any good at it. Especially with the boys. Seemed like they always had dry bottoms but wet T-shirts, cause I always forgot to point their little oo-hoos south.”
Rose: “What's an oo-hoo?”
Dorothy: “It's a chocolate soft drink.”
Rose: “I never had one.”

Rose: “My mother always used to say, 'The older you get the better you get. Unless you're a banana.”


Critique: Is anyone extremely confused about what kind of charity event actually took place in this episode? They keep referring to it as a walkathon. So I picture something like a Relay for Life where the point is to walk and raise money. But then it appears to be a road race (Sophia wears a bib with a number on it). And then Sophia's recount implies the event was, in fact, a race. Huh? But I digress. This has always been one of my favorite episodes and it's mostly a nostalgia thing. This was one of the first episodes I remember watching when I first started getting into “The Golden Girls” as they began their syndication run on Lifetime. I can't even recall how many times I've recounted Sophia's brilliant walkathon monologue. The episode kind of recalls the events of “End of the Curse” when the ladies thought they may be raising another child. And it's also similar to the beginning of the “Bringing Up Baby” episode before they realize the baby is, in fact, a pig. There are some really funny moments here. We're really far into season two and you can tell the writers are having fun. We get TWO St. Olaf stories. The characters are finally getting into their grooves. Also, for some reason I always thought that bratty little Norman and Daisy the Sunshine Cadet must have been siblings. They're both little dicks. The episode threatens to go into melodramatic overload in its third act but we really get a great sense of Blanche's character and her complicated relationships with her adult children. Rue really nails it even if it does a get a bit cheesy as she's forced to act opposed a ball of blankets that's supposed to be “Emily” and we hear the most fake baby cries ever put on television. GRADE: A-
Posted by Chris at 7:07 PM