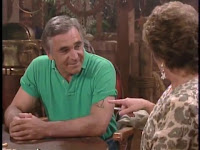 Synopsis: The girls are organizing a banquet fundraiser and hire a caterer named Jake who Blanche has eyes on, but she's overly concerned about his unrefined, blue collar ways.

80s Flashback
Blanche: “I am simply gonna look high and low, far and wide, and never lose heart, for I know one day my prince will come.”
Dorothy: “Now what was that supposed to mean?”
Sophia: “I wasn't paying close attention, but from what I could make of it she's gonna sleep with that little black guy Prince.”

Musical Moments
Blanche: “I'm just so confused.”
Musician: “You think you're confused, take a look at our horn section.”

That’s What She Said
Jake: “It tastes better if your lips are warmed up first.”

Lewd Ladies
Rose: “You know, sometimes when people are under pressure, they sleep to escape.
Sophia: “Dorothy's father used to do that. Unfortunately, it was usually during foreplay.”
Dorothy: “Ma, the man is dead.”
Sophia: “Longer than you think.”

Picture It
Sophia: “My marriage was arranged, I had no say in the matter.”
Dorothy: “You mean you didn't pick Pop?”
Sophia: “He didn't pick me, either. We learned to love each other, thank God, but it wasn't our idea. There were eight unmarried girls and eight unmarried boys in the village that spring.”
Blanche: “How'd they decide who went with who?”
Sophia: “Height. If I hadn't stood on that rock, I'd have ended up with Luigi the Pig-boy.”

Zbornak Zingers
Rose: “If I ever got another chance at a second Mr. Right, I'd want somebody entirely different from Charlie…I'd like somebody really wild. Somebody impulsive, who'd sweep me off my feet. He'd pick me up in his convertible Porsche and whisk me to the airport. We'd fly to his villa in the south of France, where we'd blindfold the orchestra and dance until dawn. And then we'd watch the sun come up over two steaming cups of cocoa...”
Sophia: “Cocoa??”
Rose: “With little marshmallows.”
Dorothy: “Marshmallows? Rose, you trollop!”

Oh Shut Up, Rose!
Jake: “I stopped to help a lady who was stranded on the side of the road, and ended up fixing her transmission.”
Blanche: “Aren't there people who do that for a living?”
Rose: “Andy Granatelli does. Although he doesn't actually fix them himself. I guess he doesn't wanna get his trench coat dirty. But I hear he has this special school in Wisconsin... I know! Shut up, Rose…”

Product Placement
Rose: “I did learn that baked Alaska can actually be cooked locally.”
Dorothy: “Rose, I have an even bigger scoop for you. Mars bars are made right here on earth.”

Sassy Sophia
Dorothy: “Hi Ma, shouldn't you be finishing those invitations?”
Sophia: “I'm just here for a glass of water, the stamp-licking dries me out.”
Rose: “Why don't you use a sponge?”
Sophia: “I feel more comfortable drinking out of a glass.”

Back in St. Olaf
Dorothy: “Blanche, did you hire the band?”
Blanche: “Rose is supposed to do that.”
Dorothy: “Well, I warn you, we may end up with the Hansger Flügenhaben Yodeling Quartet.”
Rose: “That's not true, they broke up. But the Sonia Van Kügel Tuba Band is free.”

Reel References
Rose: “I keep having nightmares about the banquet… I'm at the banquet. It looks beautiful. I look beautiful. Everybody looks beautiful. And suddenly Charlton Heston walks in, dressed like Moses. And he tries to part the dessert table. And when that doesn't work, he rounds up the guests and leads them to the lingerie department of the nearest JCPenney's, where everybody starts making fun of the fat-lady underwear. What do you suppose it means?”
Dorothy: “That you spent too many years sleeping on curlers.”

Golden Quotes
Dorothy: “Ma, you can't sleep either?”
Sophia: “No, I'm sleeping so good I thought I'd come try it in the sink!”

Dorothy: “You'll have to excuse my mother, she was a witness to the Hindenburg disaster.”


Blanche: “I don't understand how I let this thing happen. I'm so confused.”
Musician: “Honey, you think you're confused? Take a look at our horn section.”


Critique: Am I the only who gets a craving to watch “Aladdin” after watching this episode? It's called “Diamond in the Rough.” You don't know what I'm talking about? Nevermind. So I'd say Jake the caterer is probably one of the more popular guys Blanche has ever gone after throughout the series. He's extremely likable and I'm curious how many fans wanna smack Blanche upside the head for letting him go. This episode is completely fine and offers some decently memorable quotes. Overall though there's nothing that particularly memorable about it. It's simply plotted and the fact that the girls are planning yet another fundraising banquet makes it blend in with all their other charitable work. Blanche gets the most to work with here but it's Dorothy's overly low-pitched “I forgive you” to Jake that is my favorite. Sophia also seems slightly underused here except for her funny quip about “those queens on the bandstand.” Overall this is a good episode that remains well-liked by fans but is still not up to the high standards set by this wonderful season. I also wanna see Rose put a layer of caramel on her face before powdering her nose. If the musician from the “all-female jazz band” looks familiar he played Otho in “Beetlejuice.” GRADE: B+
Posted by Chris at 3:57 PM