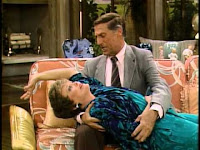 
Dorothy Zbornak is My Spirit Animal
Dorothy: “Rose. Look, Rose, it's... It's I... He's... I... We…Oooggg.”
Sophia: “This is my daughter Dorothy, she's an English teacher.”
Sassy Sophia
Rose: “Sophia. Is that a Captain Jack Seafood Shanty uniform you're wearing?”
Sophia: “No, Rose. I'm off to discover the Straits of Magellan Yo ho!”