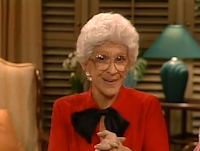 Synopsis: Dorothy surprises Sophia for her birthday by flying her Aunt Angela to Miami, but it turns out they hate each other.

That’s What She Said
Rose: “You can take your mop and put it where the herring don't swim.”

Lewd Ladies
Sophia: “Even though I've only made love in one position, I've led a very full life.”

Picture It
Angela: “Picture it. New York City. 1956. I was a young widow returning to Sicily. There I was on the boat alone, watching Lady Liberty grow smaller in the distance. When suddenly I heard a voice from the vicinity of my knees. I looked down. There was a midget. It turns out that his name was Pee-Wee Bonbunzi, and he was fleeing from the Mob. Well for the next few days, we ate together, laughed together, and went for short walks in circles. And then, one day, suddenly Pee-Wee disappeared. Well we docked in Sicily and I was going through customs and I noticed a strange odor coming from my suitcase. I thought it was the veal shank that I was bringing over for Mother's Day. But when the customs man opened the suitcase, there was Pee-Wee. Someone had stuffed him in my suitcase between the veal shank and my beaver coat. Well, the Mob had gotten Peewee after all… first I had to burn the suitcase and then the beaver coat. And the veal shank never did taste right.”

Zbornak Zingers
Rose: “I can keep a secret, Dorothy. I'll prove it to you. You tell me what you got for Sophia, and if I spill the beans, I'll give you my most prized possession.”
Dorothy: “Oh, no Rose, I couldn't do that. I couldn't accept your favorite album, Hans Klebnermeyer Yodels Beethoven.”

Tales from the Old South
Blanche: “My sister Charmaine was insanely jealous of me from the time I was a gorgeous little infant. See she was one year ahead of me in school and we used to compete for everything. But there was one thing that Charmaine did excel at: cheerleadin'. Not only could she twirl that baton like a propeller, but she knew every cheer in the county. And she could twist her body into the shape of the letter R. Well, finally Charmaine decided it was her turn to be in the spotlight. She challenged me to compete against her for captain of the cheerleading squad. When the day came we had to perform in front of the entire school, and Charmaine was fantastic. She twirled those batons so fast, she looked like a DC3 comin' in for a landing. Then it was my turn. So I did some cartwheels and only fell once. I did a handstand and almost got my balance. And I only dropped my baton four times. And when I was finished, I was unanimously voted captain of the cheerleading squad. Underneath my regulation uniform, I was wearing little, black French lace panties. Bearing the words "bon jour". Or was it "bon appétit"? I don't remember. Anyway, it was something in French. I guess, nobody minded that I couldn't do a handstand, but they surely did appreciate me trying!”

Product Placement
Sophia: “Uh Rose, after dinner, what do you say we ride over to the Dairy Queen for a couple of chocolate cones? My treat.”
Rose: “With rainbow sprinkles? They're five cents extra.”
Sophia: “What the hell, I'm a sport.”

Back in St. Olaf
Rose: “It's like that old Scandinavian saying. 'You can let two angry mackerel fight it out in a purse, but don't ever plan on carrying that purse to a formal affair.'”

Reel References
Sophia: “Angela??”
Angela: “No, Gina Lollobrigida.”
The Boob Tube
Dorothy: “Ma, you want better presents, adopt Monty Hall.”
Sophia: “I wish I could. Jewish sons are the best. They give great gifts, they always call, and you don't have to worry about them getting hurt playing sports.”

Golden Quotes
Blanche: “You see, I was a devastatingly beautiful child. Pink cheeks, cute little button nose, red ruby lips, adorable, little ringlet curls.”
Dorothy: “I was the tallest baby in the history of New York and had a rash on my head till I was two.”


Critique: SISSTAH!!! Whoops wrong sister. So, I don't know if it's just me, but at the birthday parties my family throws or attends, we usually have cake and open presents towards the end of the evening. So does that mean that Aunt Angela has literally been sitting alone in a room during the majority of Sophia's birthday party? (It's also one of those trademark GG parties where none of the other guests are allowed to talk out loud) Also, on another note, does anyone else want to see the look on Mrs. Stofer's face when Rose pinned her and her walker against a fence on a wide right turn? But I digress. Aunt Angela is probably one of the more likable family members that have made their way to 6151 Richmond St. Her first appearance is solid, though I think I prefer the one where they think she cooks up Count Bessie. Sophia and Angela work great off each other and Estelle and Nancy Walker could totally pass for siblings. This episode has several pretty good moments, though the second half suffers from so much backstory about why Angela and Sophia are feuding that its sort of easy to tune out. Angela's outlandish Pee-Wee story and Blanche's cheerleading anecdote are highlights. I would of loved an episode featuring Sophia, Angela, and their brother Angelo, but it wasn't meant to be. I guess you can only have so many guest stars at once on an 80s sitcom. GRADE: B+
Posted by Chris at 3:21 PM