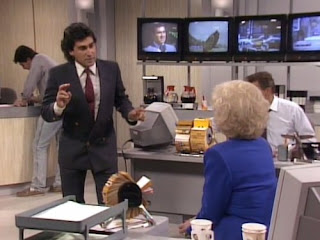 Synopsis: After losing her late husband’s pension, Rose has troubling finding a better job (aka the one with Enrrrrique Mas); Sophia becomes obsessed with shopping at Shoppers Warehouse.


Dorothy: “What do you need the money for?


Sophia: “They're having a special at Shoppers Warehouse. It's something I really need.”


Dorothy: “Ma, you know, this is how Imelda Marcos got started with that shoe thing.”


Rose: “I never heard of anything like that before. When men see that you shave your legs above the knee, what does that say to them?”


Dorothy: “That's in case they miss the tattoo that says the same thing.”


Blanche: “When did you start, Sophia?”


Sophia: “Oh, late. Not till I came to this country. In my village, hairy legs were a sign of beauty.”


Rose: “OK, what we have to do is try these different hair-removal products, evaluate their advantages and disadvantages and see which one gets our legs the smoothest. Sophia, why don't you try the regular razor. Dorothy, would you like to try this thing?


Rose: “Well, that wire vibrates and it's supposed to whisk hair away from below the skin line.”


Dorothy: “I don't know whether I wanna use this. It says it's gonna hurt.”


Rose: “Well, you can try it on your right leg and then use the hot wax on your left one.”


Dorothy: “Why don't we just set each other on fire?”


Blanche: “You know, a lot of those European girls don't shave under their arms… They just let it all hang out… Bushy as can be.”


Rose: “Well what do they look like in a strapless dress?”


Sophia: “Something's come up. A medical emergency. Can I have the money?”


Blanche: “This reminds me of the first time I ever shaved my legs. It was at a slumber party when I was 11 years old...”


Rose: “Blanche, did you really start shaving at 11? That seems so young.”


Blanche: “Oh, I did it on a dare. You know, back where I come from, everybody thought that once you started shaving your legs, why, you'd become loose. So I shaved 'em.”


Blanche: “Oh, it was an old wives' tale. I didn't become loose for another year and a half.”


Rose: “Charlie and I were so careful with our money. We saved. We never splurged. OK, one year, we went to Chicago to tour the stockyards. But it was our 20th anniversary. We had a romantic trip coming.”


Dorothy: “You must have been the envy of every woman in St. Olaf.”


Rose: “Oh, it was more than the stockyards. We even got to see where Crisco is made.”


Rose: “You can't write me off just because I'm not 30-something. I have experience. And wisdom. And insight. I'd be perfect for this job. You see, I am the battered consumer. I drive a Gremlin, for God's sake.”


Sophia: “Wow, look at this. If you buy ten boxes of adult diapers, they're only eight dollars a box.”


Sophia: “A lot of my friends do. I'll load up now and keep them for stocking stuffers.”


Rose: “You know what gets me mad about this whole thing? All those years Charlie put into that job just for the pension. He used to say, ‘Rose, I hate selling horseshoes, but if I do it long enough, you'll be set for life.’


Blanche: “Your husband sold horseshoes? I thought he sold insurance.”


Dorothy: “He should have taken you with him.”


Rose: “Anyway, after he was fired, he worked for an iron company. He sold other things, but horseshoes were his specialty. He had a sense of humor about it. We couldn't pass a horse without Charlie saying: ‘Can I show you something in an Oxford?’ Ah, then he'd laugh and I'd laugh. Sometimes, even the horse would laugh.”


Rose: “Assistant manager in a pet store. I don't know why they didn't hire me. I worked in a pet store in St. Olaf for ten years. I mean, I was the one who thought up big, squeaky toys for cows.”


Blanche: “Oh, my. Yes, Enrique Mas is a great champion of the people. Besides, he has all that gorgeous black hair. And those swarthy Latin good looks and the sexy way he rolls his r's. Enrrrique. Boy, I'd love to get him on a couch made out of Corinthian leather.”


Sophia: “In a strange way, shopping there makes you feel immortal.”


Dorothy: “This better be just an example.”


Sophia: “Of course. You get 20 cases of sardines, you figure: God doesn't want me to waste good sardines. He's gonna wait till I finish the 20 cases. That could take five, six years.”


Blanche: “What in the hell are all those sardines doing in the kitchen??”


Enrrrrrique Mas: “I am not a fake. Mrs. Nylund, ever since I was a little boy, I wanted to be on TV. Do you know what that's like for a Hispanic kid? Who were my role models? Zorro and Ricky Ricardo. A gay caballero and a man who couldn't recognize his own wife in a fake mustache.”


Sophia: “Dorothy, your father's on the phone.”


Blanche: “I'm helping her look. We're going through the classifieds and cutting out ads that might be of some interest to her.”


Sophia: “You're not cutting up the obituaries, are you? I wanna make sure my canasta game is still on for tomorrow.”


Dorothy: “I used to think Stan would take care of me. I mean, we didn't have much saved, but he was a darn good novelty salesman. Sounds naive now to think that I placed my hopes for the future on a bald pinhead with the morals of a maggot who made his living selling plastic dog-doo. Well, at least I'm not bitter.”


Rose: “Boy, my mother would kill me if I ever did that. She never wanted me to shave at all. By the time I got to high school, the kids had made up this really mean nickname for me just because I had hairy legs.”


Rose: “Rose with the hairy legs.”


Critique:
Ok let’s be honest. The message of this episode- the whole age discrimination thing-is important and all and disturbingly accurate even today, but there’s no way in hell a person Rose’s age would actually be hired to be a production assistant at a TV station. There I said it. It’s wrong and sad, but true. But good for Rose. And good for us because “Rose Fights Back” is a great episode. It gives us Sophia’s wacky adventures at Shoppers Warehouse, a hilarious cheesecake scene in which the girls reminisce about shaving their legs, and, of course, Enrrrrique Mas himself (played by Chick Vennera who played another Hispanic stereotype in “Fiddler on the Ropes”). I’m impressed -as I am with most of the scripts for this show- at how well the male writers wrote for the women. The shaving scene is one of my all-time favorites. It’s super “girly” in a way but somehow it’s still fascinating to watch these four ladies tell funny stories and throw barbs back and forth. And lastly, thinking about it, I’m not quite sure how being a production assistant could possibly pay Rose’s bills, which was the catalyst for this episode, but I digress. GRADE: A-
Posted by Chris at 12:35 PM