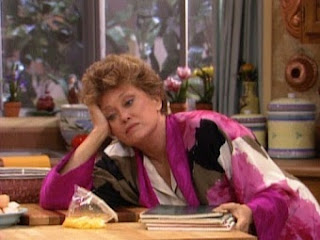 That’s What She Said
Blanche: “Just open it anywhere and the magic will touch you.”

Insult Watch
Blanche: “Since when are you a literary critic, Rose Nylund?”
Rose: “Well I'm not.”
Blanche: “You're from Minnesota. What have you read, for God's sake? Silas Marner? Paul Bunyan? Nothing. You know nothing. People from Minnesota are considered well-read if they get through the Sears catalog.”

Product Placement
Dr. Harry Weston: “Dorothy. Dorothy. Don’t smash the Play-Doh.”
Sassy Sophia
Dr. Chang: “If there are no more questions, I'll order some blood work-”
Sophia: “I have a question.”
Dr. Chang: “Of course, Mrs. Petrillo.”
Sophia: “When I order at Fung Chow's and say no MSG, do they really put it in anyway?”

Best of B.E.D.
Blanche: “All I ever wanted was to be special. I thought this would do it. I thought I'd publish a novel and I'd be special. 'Course, I've always been special because of my looks, but they won't last forever. I have to be realistic - another 20 or 30 years. My face and body might start to go and then I'll have nothing. Nothing to make me special.”

Sweet, Single-Digit-IQ Rose
Sophia: “Rose, what the hell are you doing?”
Rose: “I'm making omelets for us without yolk so we don't get too much cholesterol. And that leaves us all these yolks, which I hate to throw out, so I thought we'd give them to the homeless.”
Sophia: “Fine. Give them egg yolks. They'll die of heart attacks. They won't need homes. Your heart's in the right place, Rose, but I don't know where the hell your brain is.”

From Feud to Food
Sophia: “You're a genius. All your people are brilliant. The Chinese invented pasta, you know. We take credit for it, but we just added oregano.”

What, We Can’t Learn From History?
Blanche: “My brain's gone. My body is limp with exhaustion. I suppose all the greats knew this feeling. And the thing is, after all this I've decided not to sell my book. It's too good to sell. They can publish it after I'm dead, like Vincent van Gogh.”
Dorothy: “Van Gogh was a painter, Blanche.”
Blanche: “Whatever. It's all the same thing. We're all artists. We're all misunderstood. He cut off his hair. Maybe I'll cut off mine.”
Dorothy: “He cut off his ear.”
Blanche: “I have too many earrings.”
Sophia: “We gotta go. I hate to leave. I've never seen a show like this before.”

Literary Intelligentsia
Rose: “Blanche, you are exhausted. You have to sleep.”
Blanche: “To sleep, perchance to dream. My God, what a wonderful line. Oh! I'm getting so good I can't stand it. I ought to write that in my book, that line.”

Reel References
Blanche: “Give me back my book. This is why Hollywood won't get it either. I will not have my words coming out of Glenn Close's mouth. I'd rather die.”
Sophia: “The man's a genius. By the way, I loved Flower Drum Song.”

Golden Quotes
Blanche: “My God, I'm hallucinating. I see little balls of sunshine in a bag. Does this mean something??”
Rose: “Those are egg yolks, Blanche.”
Dorothy: “Harry, am I gonna die?”
Dr. Harry Weston: “I'm afraid so.”
Dorothy: “Do you really think so?”
Dr. Harry Weston: “Sooner or later, I guarantee it. Unless, of course, the Japanese come up with something.”
Rose: “Good luck, Dorothy. I hope he finds something wrong with you. Oh, I don't mean something wrong wrong. I just mean something wrong so you know you're right when you know there's something wrong and you haven't been wrong all along.”
Blanche: “My God, I can't even understand people when they speak anymore, I'm so tired. What'd she just say, Dorothy? Was that a po-em?”

Blanche: “I can trust you, I know I can. You're from Minnesota. People from Minnesota are honest.
They don't lie. What could you possibly find to lie about on a farm? Must be some state. Lots of lakes and nice, pale people. I'd drown myself.”

Rose: “You know, I'm getting sick of you knocking Minnesota. Maybe we're not as sophisticated as Miami, maybe we don't have French boutiques and valet parking and face-lifts for Christmas vacation, but we have friends and family and a sense of community and caring, and that's pretty special. And our people are special too. And if we have farms, that's great. Without farms, you couldn't eat, and without eating, you wouldn't be able to go on a diet, and if you couldn't do that, what would you do for the rest of your life?! Was I harsh?”

Dorothy: “It is a celebration.”
Waiter: “What are we celebrating?”
Sophia: “My daughter found out she has a debilitating disease.”

Critique:
Little. Balls. Of. Sunshine. In. A. Bag. Those seven words echo loudly throughout Golden Girls fandom. It’s probably one of the most popular scenes in the entire series and features Rue McClanahan as we’ve never seen her before; and she totally sells the shit out of it. For a brief moment you sort of forget the possibility that Dorothy could be dying. Speaking of Dorothy, Bea really kills it in that final scene at the restaurant when she rips the doctor from New York a new one (who just so happens to be vacationing in Miami and eating dinner at the same exact restaurant, but I digress) but let’s address the elephant in the room shall we? Bea is reading from cue cards off-camera and it’s only been distracting ever since I found out about it, so it’s my duty to make sure you know that as well. It’s ok Bea, we still love you; it was a pretty long (and awesome) monologue after all. This is a staple, fan-favorite  two-part episode and Dorothy is finally diagnosed with Chronic Fatigue Syndrome (which writer Susan Harris had symptoms of but it turned out not to be CFS). The ending is a nice little F.U. to the male dominated medical profession and an ode to women who aren’t taken seriously. As Rose once said, "Go Dorothy Go!" Sure there are no St. Olaf stories, tales from the Old South, or nostalgic trips to Sicily - not to mention Sophia's mildly racist, but funny scene with Dr. Chang - but it's a totally solid half hour. Note: I'm adding a category called "From Feud to Food" for all those fun culinary references.  GRADE: A-