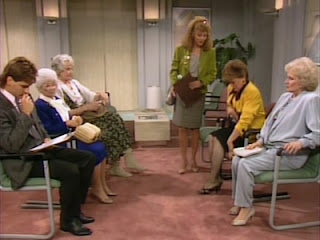 Synopsis: Blanche’s daughter Becky returns and announces she’s getting artificially inseminated; Sophia refuses to see the doctor for a checkup.


This episode marks the return of Blanche’s daughter Becky, (this time played by actress Debra Engle) but there’s no mention of her having been overweight, or running off to Europe to become a model, or anything about needing a small barge to bring her to Miami.


Sophia: “Just outta curiosity, you don't have any Tony Bennett socked away, do ya?”


Sophia: “I remember, Dorothy, when you were deciding what you wanted to be.”


Dorothy: “Ah, yeah. I wanted to go to college and be a schoolteacher. Pop wanted me to be a cosmetician in a funeral parlor.”


Sophia: “He always liked looking at dead people. Dead people and the Dodgers. That was it for him in the good-time department. Sometimes, just to make him happy, I used to lie in bed with a baseball hat on.”


Dorothy: “I swear, he must of slipped me something.”


Sophia: “I'm gonna have to agree with Blanche on this one. Half the fun is in getting there. And boy, did your father and I have fun trying for you.”


Sophia: “I wasn't gonna tell you until you're 60, but I think you can handle it now. We lived in New York at the time and there was the San Genarro festival every year. And your father, may he rest in peace until I get there, got so turned on by the festivities one year he couldn't wait till we got home.”


Sophia: “So he took me. Right there, behind the sausage and pepper stand. Hey, we were behind the garbage cans. It's not like we were in front of everybody.”


Blanche: “What in hell are we doing here? I feel like I'm in the middle of some awful dream, yet I know it can't be a dream 'cause there are no boy dancers. I just cannot believe you are actually gonna give money to someone like this sperm pusher. You are a Devereaux. A Devereaux has never had to pay for it. I certainly haven't.”


Dorothy: “She's always depended on the kindness of strangers.”


Blanche: “I don't want to go to a place like that. It's too embarrassing. What if one of the neighbors saw me going in? What would they think??”


Dorothy: “That you're picking something up for a much younger person.”


Sophia: “I bet this is more fun than giving blood!”


Rose: “On the farm a lot of the animals got artificially inseminated. Once Harry the bull went through a whole spring unaroused and the cows and my father were out of their minds with grief. I mean, you haven't seen anything till you've seen a frustrated cow. They can get this crazed look in their eye and you know they're thinking, ‘Where's mine?’”


Rose: “Cows have feelings, too. Anyway, when Harry really got lazy Dad had to bring in Mr. Hoffenheisen to spread the seed. He did it in the most unusual way. He'd put on this really long rubber glove-”


Rose: “I can relate to the festivities part, Sophia. All our children were conceived on special St. Olaf holidays. Adam was conceived on the Day of the Princess Pig when they had the pig crowning, and Jeanella was conceived on Hay Day. That's the day we St. Olafians celebrate hay.”


Dorothy: “Rose, do you think you could wrap this up before Rebecca goes into labor?”


Rose: “Then there was the Day of the Wheat when everybody came to town dressed as sandwiches. Charlie and I forgot to put cheese between us and before I knew it, there was Kirsten.”


Blanche: “So, this is the thanks I get for all those cold nights when you were a baby crying and I'd have to get up out of bed and grope around in the dark for my slippers and robe, make my way all the way downstairs and scream for the governess!?”


Dorothy: “Blanche, your daughter is about to leave for the airport. What the hell are you doing out here?”


Blanche: “Well, there's still some sun. I thought I might get a little color.”


Dorothy: “Blanche, this has to be absolutely the dumbest thing you could possibly do.”


Rose: “Dorothy's right. The sun's rays can be dangerous now there's a hole in the ozone layer.”


Dorothy: “OK, OK, Ma if you don't wanna go to the doctor, you don't have to go to the doctor. All right? I'll tell you what. Why don't we spend tomorrow afternoon together? We'll work on our bonding. I'll take you to Wolfie's for an egg cream.”


Rose: “You know I'm not so sure sperm can't live outside the body. Back during World War II, my best friend Claire Osterhaus's husband was in the army and stationed in France. Well, five months after he left St.Olaf, she got pregnant. A lot of people thought she was fooling around, but she told me that sperm must have swum from Normandy. Across the Atlantic, up the St. Lawrence Seaway, into the Great Lakes and then over to Minnesota.”


Blanche: “And what did you think, Rose?”


Rose: “Well, I know those little guys are supposed to be good swimmers but I think it had to come over by mail.”


Rose: “Well, it might not be so bad. In fact, just last week I was reading that you can buy the sperm of Nobel Prize winners. Or was it Star Search winners?”


Sophia: “At my age, checkups can be dangerous to your health. You know Sam down the block, the one who thinks he's hiding his stomach by wearing Hawaiian shirts?”


Sophia: “His brother went for a checkup seven years ago. The doctor said he was great. Three days after the exam, he was dead.”


Dorothy: “Ma, he owed money to a guy named Face and got thrown off a pier.”


Sophia: “That was one of the causes.”


Blanche: “If you will excuse me, Becky and I are having breakfast on the lanai. We're still bonding.”


Dorothy: “We're from before bonding and quality time. We're from when people stayed together because they had no choice.”


Dorothy: “Ma, I scheduled the appointment for your checkup. Ma, you know you have to have a physical. What do you want me to do? Take you to court? Have you declared incompetent?”


Sophia: “I'm not incompetent. Once when I laughed too hard, I had a little accident.”


Dorothy: “I don't think you should be doing anything as strenuous as going to a sperm bank until you've had that checkup. Too bad.”


Sophia: “All right, I'll go to the doctor, but this better be a GREAT sperm bank!”


Blanche: “What does one wear to a sperm bank??”


Dorothy: “Something attractive, in rubber.”


Rose: “How did things go at the doctor's, Sophia?”


Critique:
How freaking amazing is this episode? It is nearly busting at the seams with quotable line after quotable line. You could fill Becky’s small barge full of quotable dialogue. This episode sort of marked a turning point for the series. A slew of new writers were brought in, and this would be the last season with director Terry Hughes. But I digress. Let’s get to the sperm. Have you ever heard the word sperm used so much in 24 minutes? There are so many great jokes, most of which are even funnier because four “old ladies” are talking about such a taboo subject. Speaking of taboo things, I still don’t get what the big deal is about Becky wanting to be artificially inseminated. I know Blanche is traditional and old-school but come on. She has a gay brother, you’d think she could handle anything by now. I also love how whenever one of the girls has an issue with a family member they literally all have to take part. Why the hell would Becky want to see the sperm pusher, err, doctor with her mom’s roommate’s 80-something mother? Speaking of Sophia. She’s certainly this episode’s MVP. While her B story about having a physical is ultimately pointless and meaningless compared to the main story line, her line readings and reactions are simply priceless here. I would go on a sperm bank national tour with her. It certainly would be more fun than giving blood. GRADE: A
Posted by Chris at 12:21 PM