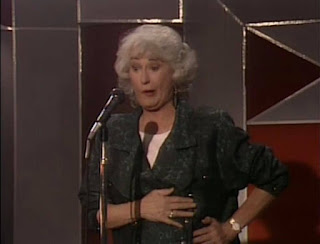 Synopsis: Dorothy gets inspired to fulfill her lifelong dream of being a stand-up comedian; Blanche is audited by the IRS; and Rose tries to get her co-worker to like her.


Dorothy: “This money that you forgot to give to the IRS, what did you do with it?”


Blanche: “I can't remember what I did with every penny. I know I gave some of it to charity.”


I think the IRS audited Blanche because the auditor Gloria Schmidt looks suspiciously like Frieda from the Ladies Auxiliary who Blanche accused of sleeping with the Japanese guy who blows the leaves outta her driveway in “You Gotta Have Hope.”


Blanche: “It was so much easier when I was married. I'd buy something expensive, George would yell at me, I'd put on a see-through nightie, and that’d be the end of it. Why can't the government work that way?”


Dorothy: “According to the newspapers, a lot of times it does.”


Vanskap kokker - A St. Olaf friendship cake. It's made with milk, sugar, honey, a whole lot of love, and just a drop of sunshine.


Roger “I've come to talk to you about this cat you sent me.”


Rose: “When I saw him at the pound, I knew he'd be just the cat for you. I named him Buster. Isn't he precious?”


Blanche: “My accountant reminded me that I've been audited before and I've never had to pay a penny in back taxes. I have a way with auditors. The last time I was audited I got money back from the government.”


Sophia: “Blanche, it's not a refund when the auditor leaves two twenties on your nightstand.”


Dorothy: “I've been sitting here looking through the book, and I can't believe how many of my classmates are gone. I mean, look: Frank Bonatardi, tight end on the football team - heart attack, dead.”


Blanche: “What happened to him?”


Dorothy: “God told David to drive into a wall at 80 miles an hour.”


Dorothy: “I was in the drama club. I was also voted the most humorous girl in my class.”


Sophia: “She went to a special school for the dull.”


Dorothy: “How did it go at the accountant's?”


Blanche: “Oh, just fine. Hey while I was in the waiting room, I was reading a magazine that listed the ten richest men in America. You know, Merv Griffin's moved up a couple of notches.”


Dorothy: “He probably ate the two guys ahead of him.”


Blanche: “OK, Rose, I'm going to tell you a little story about a young girl in high school who was very insecure about the other kids liking her. Now, she would do anything - anything - to gain their approval. She would do their homework for them, while her grades suffered. She would give them her lunch money, in the misguided belief that she could buy their acceptance. Finally, lonely and desperate for affection she gave her virginity to the first boy who showed her the slightest attention.”


Dorothy: “You know, Blanche, until you told this story, I never realized how much we had in common.”


Blanche: “We don't have anything in common. That was a story Sophia told me about you.”


Sophia: “What are you doing?”


Blanche: “Dorothy's going through her high school yearbook, to see who's all is dead.”


Rose: “Did I ever tell you the story about Herder Schornborscht?”


Rose: “Well, then you remember, he was St. Olaf's most famous shepherd. Well, Herder used to say, you can have a hundred sheep, and if one goes astray, that's the one you go look for. Especially if it's the best-looking one.”


Dorothy: “Blanche, how are you going to explain that outfit?


Blanche: “The zipper's in the back.”


Sophia: “Please. I've always been supportive. Remember when you wanted to run away to Canada so you wouldn't get drafted?”


Dorothy: “Ma, that was my brother Phil.”


Sophia: “Oh, yeah. I got confused, he was wearing your dress.”


Blanche: “You've come this far. You might as well go through with it.”


Dorothy: “But what if nobody laughs?”


Blanche: “You know, I had a list like that - and I've done most of 'em. Except for Burt Lancaster.”


Dorothy: “I haven't done half the things on this list. I mean, what am I? I am a substitute teacher. I'll never be rich before I'm 21, I'll never be homecoming queen.”


Sophia: “You can still be homecoming queen. It'll just be a different kind of home.”


Sophia: “The old one isn't so crazy about you!”


Dorothy: “Do you remember those variety shows that my class used to put on? I was really very good. You know, I'd get up there and tell a few jokes about the teachers, about the cafeteria food. Ma, do you remember, ‘You call THIS tapioca?? HAHAHAHA!’”

Blanche: “Do you remember when we went to amateur night at the Comedy Barrel? You've got to be as good as some of those people.”


Dorothy: “I couldn't. I'd be up there sweating bullets.”


Sophia: “And dodging some.”


Sophia: “Dorothy, have you seen my teeth?”


Sophia: “I know that. Don't they look good today? I ran them through the dishwasher.”


Dorothy: “Ma, listen to me. You got Martha Raye and Madge mixed up again.”


Sophia: “Didn't I come here to live with you in your twilight years?”


Dorothy: “Ma, these are your twilight years.”


Sophia: “Are you kidding?? I'm supposed to be dead. These are YOUR twilight years.”


Dorothy "Show Us Your" Zbornak: “You know, at our ages, the four of us living together in the same house, we go through so many hormone changes that some nights we can actually read by the hot flashes.”


Dorothy: “No, doing stand-up was like having sex with Stan. I was nervous before, it felt pretty good during it, and I'm absolutely thrilled that I will never have to do it again.”


I wonder if Dorothy really knows which one is Siegfried and which one is Roy? But I digress. What a bizarre episode right? Three plot lines that have nothing to do with each other, sort of like “Triple Play,” which will be coming up later this season. Besides the sheer randomness of this episode, I find it strangely titillating. I love it when Dorothy thinks she’s funny which is why the comedian story line is what I find so likable here. I never really buy that Dorothy, a person who’s so self-conscious, would ever want to entertain large crowds of people but here we are. The little we get to see of her act is actually pretty entertaining. Hopefully at some point the Ladies Auxiliary got to put on another talent show that she could emcee. She bombed that Joan Collins joke, but maybe she’d do better now that she has more experience? Blanche’s story line is fine with a fun pay off, as is Rose’s bizarre obsession with a co-worker we never see or hear from again. Sophia’s role here is again to insult the hell out of everyone, especially Dorothy. She tells her to “fall the other way it’s funnier” and to cut her throat and even writes a million jokes about how stupid Rose is. It’s my kind of humor. Also, I’m pretty sure Blanche’s nightgown that she wears during her audit is probably one of her best ensembles. Too bad it’s wasted on Gloria Schmidt! Note: I’m introducing a new category called “What Do I Look Like, a Cross Dresser?” to keep track of all of the mentions of Dorothy’s cross-dressing and mysteriously never-seen brother Phil. GRADE: A-
Posted by Chris at 3:23 PM