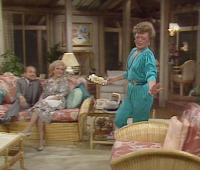 Synopsis: Rose begins dating a psychiatrist and is nervous to tell Blanche and Dorothy that he's a little person. Meanwhile, Sophia goes to visit her son Phil for her grandson's graduation.

80s Flashback
Rose: “Jeane, could you tell me what the future holds?”
Jeane Dixon: “Sure! In January, Brooke Shields and Lady Di will star together in a Broadway musical comedy...”

Crazy Continuity
Does the waiter look familiar? He appears in two more episodes...once as a doctor and again as a server.

That's What She Said
“Rose: “How big a man is shouldn't make or break a relationship.”
Dorothy: “Not a word, Blanche.”

Lewd Ladies
Sophia: “My son married a welder. Too bad she didn't weld his zipper shut. They got ten kids they can't afford.”

Zbornak Zingers
Blanche: “I enrolled in a CPR class. For six consecutive hours, I was on my back while dozens of eligible men pressed their lips to mine and breathed air into my limp little body!”
Dorothy: “So what? You did the same thing at McSorley's Bar Super Bowl weekend.”

Tales from the Old South
Dorothy: “That must have taken real courage for both of you. And it's terrible to think that the two of you were almost kept apart just because Benjamin was black.”
Blanche: “Black? Benjamin wasn't black. He was from New Jersey. I went to my senior prom with a Yankee!”

Product Placement
Rose: “How do I look?”
Blanche: “Ooo...To the untrained eye, that polyester could almost pass for silk!”
Rose: “It is silk.”
Blanche: “Oh sure, Rose, and Cheryl Tiegs really buys her clothes at Sears.”

Sassy Sophia
Rose: “Sophia, why are you in a priest's outfit.”
Sophia: “Because I'm the one who's gonna marry you.”
Rose: “But that doesn't make any sense.”
Sophia: “What the hell do you want from me it's your dream.”

Best of B.E.D.
Blanche: “I can't wait to meet Dr. Newman. He was fascinating on the phone. He analyzed my dream! That recurring dream I have where I'm running naked through a train that keeps going through tunnel after tunnel, while a sweaty bodybuilder chases me. He said he thinks it's sexual.”
Dorothy: “He thinks? For God's sake, Blanche, you smoke a cigarette after that dream.”

Reel References
Dorothy: “A Yankee, a Yankee? That is incredible! And to think they made a movie about that deadbeat Gandhi, when there's a story like this that hasn't been told.”

Golden Quotes
Sophia: “That guy over there. Is he a midget?”
Dorothy: “Yes.”
Sophia: “Thank God I thought I was having another stroke.”

Critique: This completely outstanding, Emmy Award-winning episode (for Best Writing in a Comedy Series) is top-notch “Golden Girls.” Arguably the best written, acted, and directed episode of the first season, “A Little Romance” is brimming with hilarious lines of dialogue, hysterical performances, and clever gags. Highlights include: Rue McClanahan being a comedic Tour de 'France' (“Shrimp?!”) and her fantastic Benjamin story;  a ridiculous and hilarious dream sequence; a funny pillow sight gag, and a really clever final little twist. This is where the first season really takes off, most of the episodes from here to the end of the season are top-notch. Everyone is really on their game here; it's a classic early, must-watch episode. GRADE: A
Posted by Chris at 11:07 AM