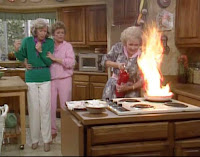 Synopsis: Rose's blind sister Lily comes to visit, almost burns the house down, and asks Rose to move in with her; the girls decide to have a garage sale.

80s Flashback
Rose: “Would you be interested in going to an outdoor concert tonight?”
Lily: “Oh, you couldn't drag me out of this house tonight. St. Elsewhere's on. That's my favorite program. I never miss it.”

Zbornak Zingers
Rose: “I forgot to kiss you two goodbye.”
Blanche: “Goodbye.”
Dorothy: “Come on now, come on now. Get out of here. You come back more times than Shirley MacLaine.”

Insult Watch
Blanche: “Let's have a garage sale.”
Rose: Well, can we get in trouble having a garage sale? I mean we're not actually selling a garage.”
Sophia: “If it's a choice between the two of them, let the blind one make change.”

Tales from the Old South
Blanche: “Oh, I just love barbecues. We used to have the most wonderful ones back home. I can remember sitting out under a big old tree with the Darcy triplets: Hank, Beau and Dove. Eating and talking and laughing. And then along towards the end of the meal, why, the boys always got into a fight over who was going to get to lick the barbecue sauce from my fingertips and kiss away the little droplet of butter that always drizzled down my chin…. Has it gotten awful hot out here??”

And later Blanche tells a story about “guilt;” she worked as a riveter during the Korean war and possibly had an affair with Andrew Beandorf while George was fighting in the war.

Product Placement
Garage sale customer, bargaining with Sophia: “I'll give you a dollar fifty.”
Sophia: “What does this look like, Baghdad? Get the hell out of here!”
Dorothy: “Ma, that's no way to sell things! Hey, go to Neiman Marcus sometime, see if they treat you any better.”

Sassy Sophia
Rose: “Gee, those steaks smell good.”
Sophia: “What do you know, Rose? You thought you could go out in the ocean and catch fish sticks.”

Back in St. Olaf
Lily: “During the summer, our father would take the whole family on camping trips into the wilderness.
Of course, it wasn't really the wilderness. He'd drive in circles for about twenty minutes and then end up in the woods just beyond the barn. It was years before all the kids caught on to Dad's trick.”
Rose: “What do you mean, 'just beyond the barn?'”

Reel References
Rose: “You went to Woodstock?”
Blanche: “Well, actually it was the movie, but afterwards we did go home and make love in the mud!”
Dorothy: “I guess the 60s were a confusing time for all of us, Blanche.”

Golden Quotes
Dorothy: “Listen, Mom, we cannot afford a new TV. We're using the household money to repair the roof and repave the driveway.”
Sophia: “Great, and what am I supposed to do while every other old lady on the block is watching Cosby?”
Dorothy: “You can sit in the new driveway and hope that an amusing black family drops by.”


Critique: Does anyone else find it disturbing when Dorothy calls Sophia “Mom” and not "Ma?" Boy these early episodes really mess with my head. At least St. Olaf is finally a thing. Everyone has their opinions about certain members of the girls' family. Lily is the first time we meet one of Rose's siblings and even though she's blind she's not one of the most well-liked of relatives we've met. There's a lot of overly dramatic moments here that seem to fill out the first season of the show. Though there are some decent moments and good lines of dialogue. If Lily looks familiar, she was the lady who gets thrown out the window in “Gremlins” and had a bit part in “Mrs. Doubtfire” as well. GRADE: B
Posted by Chris at 3:54 PM