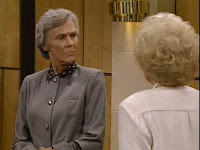 Synopsis: The girls are distraught because the city is going to cut down a beautiful, old Oak tree which resides on the property of the one and only mean old lady Freida Claxton. Then things take a strange turn when Rose tells Freida to drop dead and she does.

80s Flashback
Commissioner: “It is the consensus of the committee that the promoters' petition for the outdoor Menudo concert be denied.”

Crazy Continuity
Is it just me or is Frieda Claxton reincarnated as Sophia's longtime Sicilian friend Philomena from Season Four?

That’s What She Said
Blanche: “I happen to be a wonderful orator. And two of the commissioners can verify that.”

Lewd Ladies
Dorothy: “Blanche, you've been gone three hours and you only got one guy to sign this petition.”
Blanche: “Give me a chance to freshen up and change clothes, I'll get you another one.”

Insult Watch
Sophia: “When a person dies, you go to a funeral to show the man upstairs you have respect for human life, no matter how wretched it was. Any idiot knows that.”
Rose: “I knew that.”
Sophia: “See?”
Until the Buffalo Pooped...
Rose: “Girls, I've got great news. I've just come from Mrs Claxton's and she says she wants to save the tree… I've gone to her house every day this week with a variety of home-made Danish, begging her to listen to reason. Well she didn't want the apricot, and she didn't want the cheese, but today the prunes seemed to do the trick!”
Sophia: “Always does for me.”

Tales from the Old South
Blanche tells the story about how she faked her death as a teenager. At the Miss Magnolia Blossom Pageant Blanche was awarded runner up and named “Miss Congeniality” and then vowed to get back at the town. Afterwords she was dragged to a religious school in Atlanta.

Product Placement
Mrs. Claxton: “You wanna look at pictures? I've got pictures. Of her roommate, the Human Slinky.”

Sassy Sophia
Rose: “Oh Sophia, I think you're a wonderful person. It's a lovely idea to share Mrs Claxton's funeral expenses equally.”
Sophia: “Equally?? I figure your share should be about half. After all, you're the one who killed her!”

Back in St. Olaf
Rose tells the story of the grouchy Ernest T. Minky, St. Olaf's librarian and only dentist who was so mean that people hated going to the dentist. Everyone in St. Olaf had teeth that looked like Indian corn. But once Rose saved his life he began to lighten up.

Best of B.E.D.
Blanche: “Sixteen was a very difficult age for me. My hormones were racing, my body was blossoming. I had urges and yearnings so strong. Sometimes I'd wake up in the middle of the night, just sweating and screaming and clawing, like a trapped panther. Unable to release the lusty, steamy passions that constantly threatened to erupt from within me.”

Reel References
Mrs. Claxton: “Look there's nothing I hate more than someone who thinks that every person who lives alone wants company and a few kind worlds. I live by myself because I like it. Ive got no use for people and never have. See ya inside.”
Dorothy: “Ma, where are you doing?”
“To throw holy water on her. If she spits up pea soup and her head spins around we're in big trouble.”

Golden Quotes
Dorothy: “Mr. Pfeiffer, we're interested in arranging a funeral.”
Mr. Pfeiffer: “Isn't that lovely? The three of you planning ahead for Mother.”
Sophia: “Hey, uh, Pfeiffer, how would you like a punch in your p-face?”

Old Woman: “Yes, Celia Rubinstein loved all mankind. She was...”
Dorothy: “WHO?!”


Critique: So when Mrs. Claxton drops dead in the courtroom and everyone just stands around looking and doing nothing, is it because they all hate her or am I just reading too much into it? But I digress. Well, Season Two is really on a roll isn't it? The writers are firing on all cylinders in these episodes. “It's a Miserable Life” is great because it's one of the few darkly humorous episodes throughout the series. The show was never shy about tackling taboo subjects especially when it came to death. They were always getting away with crazy stuff. Not only does Blanche tell a story about how she faked her death as a teenage but later AN OLD WOMAN LITERALLY KICKS A WOMAN'S COFFIN DURING HER FUNERAL FOR GOD'S SAKE. And it's utterly brilliant. This episode works so well because of the fun twist of not only Fried Claxton dying but because of the running joke that Rose is the one who caused it. The funeral parlor scene with Mr. Pfeiffer (I could listen to Dorothy pronounce puh-Feiffer all day long) is a standout of the entire series and is filled with fan favorite memorable lines (the Superman line being my favorite bit). This is a classic episode overall. As a final note, who else would totally binge the crap out of “Blanche: The Miniseries?” GRADE: A
Posted by Chris at 6:31 PM