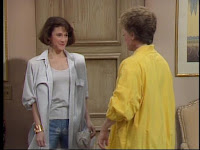 Synopsis: Blanche's niece Lucy comes to visit but spends the entire time sleeping with every man she meets; Dorothy is determined to get ride of a mouse in the house.

Crazy Continuity
Blanche says Charmaine is her older sister, though when she appears on the show in a later season, she appears to be Blanche's younger sister.

That’s What She Said
Dorothy, to Lucy: “We enjoyed having you.”
Sophia: “So did half of Miami!”

Animal Alert
The house is infested by one small mouse.
Rose: “I can communicate with animals. He's just a little field mouse who's lost his way. He'll listen to me. Mice always have.”
Dorothy: “Rose, do you have any idea how weird you are?”

Picture It
Sophia: “I used to know a girl like that in Sicily. She slept with every Tom, Dick, and Vito in our village. Finally, the women took matters in their own hands. They dragged her to the outskirts of town, threw her on the ground, and asked her, 'Why? Why? Why would you do such a thing?'
Blanche: “What did she say?”
Sophia: “'What else is there to do in this godforsaken village?'”
Dorothy: “Ma, what does this have to do with Lucy?”
Sophia: “Not a thing. It's the only slut story I know.”

Zbornak Zingers
Dorothy: “He's back! I saw him running across my dresser.”
Rose: “Who's back?”
Dorothy: “O.J. Simpson, Rose.”

Insult Watch
Ed: “Tuesday night, I'm getting together with a couple of buddies. We're going through Don Johnson's trash!
Dorothy: “Goodnight, Ed. We're going to go home now. And I want you to know, we'll all sleep a lot better knowing you're off duty tonight.”

Tales from the Old South
Blanche: “When I was 15, I dropped out of school for a month to become a magician's assistant. When I was 16, I ran off with a gas station attendant twice my age to get married in Mexico. When I was 17, I hitchhiked to New York, and for two months, I was a Rockette under an assumed name.”

Product Placement
Blanche, to Lucy: “Let me get a look at you, girl. Mmm, terrific little figure, gorgeous hair, perfect skin. Just like looking in a mirror.”
Sophia: “Get some Windex!”

Sassy Sophia
Dorothy: “Uh, Blanche, this trip to the Bahamas, it is not with the doctor.”
Blanche: “What do you mean?”
Sophia: “Girl's a slut.”

Back in St. Olaf
Rose: “A mouse saved my life once. His name was Larry. Larry the mouse. Oh, I loved Larry. He used to walk to school with me every day on a little leash I made out of kite string. One day, we were about to cross the bridge down near the schoolhouse, and Larry stopped dead in his tracks. No matter how I yanked on that leash, he just wouldn't move. Suddenly, I heard this loud noise. The dam upstream had broken, and this rush of water swept the bridge away. Larry saved my life. If it weren't for a mouse just like that little one in the kitchen, I wouldn't be sitting here today, telling you this story.”
Dorothy and Sophia, in unison: “Call the exterminator!”
Later, Rose tells a story about her rebellious years where she'd sneak off to meet Clel Lightener in the “flashy, fast-paced city” Tyler's Landing. It turns out to be a “changing religions” story not a “teenage rebellion” story:
Blanche: “Rose, that isn't a "teenage rebellion" story. That is a "changing religions" story. That is a big "who cares?" story. That is a "why-the-hell- tell-it-in-the-first-place?" story!”

Golden Quotes
Lucy: “Aunt Blanche, you always said, 'If you've got a stallion eating oats out of your hand, best close the gate before you give him the sugar!'”
Dorothy: “You said that, Blanche?”


Critique: Here we are seventeen episodes into Season One and we've yet to hear St. Olaf by name. However, we do get two full St. Olaf stories. A vast improvement on the previous episodes, this story about Blanche and her rebellious niece has echos of “On Golden Girls” where Blanche's teenage grandson was a hellraiser as well. There are lots of fun moments peppered throughout this episode and some really great pieces of dialogue. The B-story involving a mouse is sort of random as I never believed that Dorothy would be scared of a small mouse having grown up in New York City. I'd also like to think that the creators of the Broadway show “Avenue Q” named their skanky stripper puppet character Lucy the Slut after Blanche's easy niece. GRADE: B
Posted by Chris at 2:13 PM